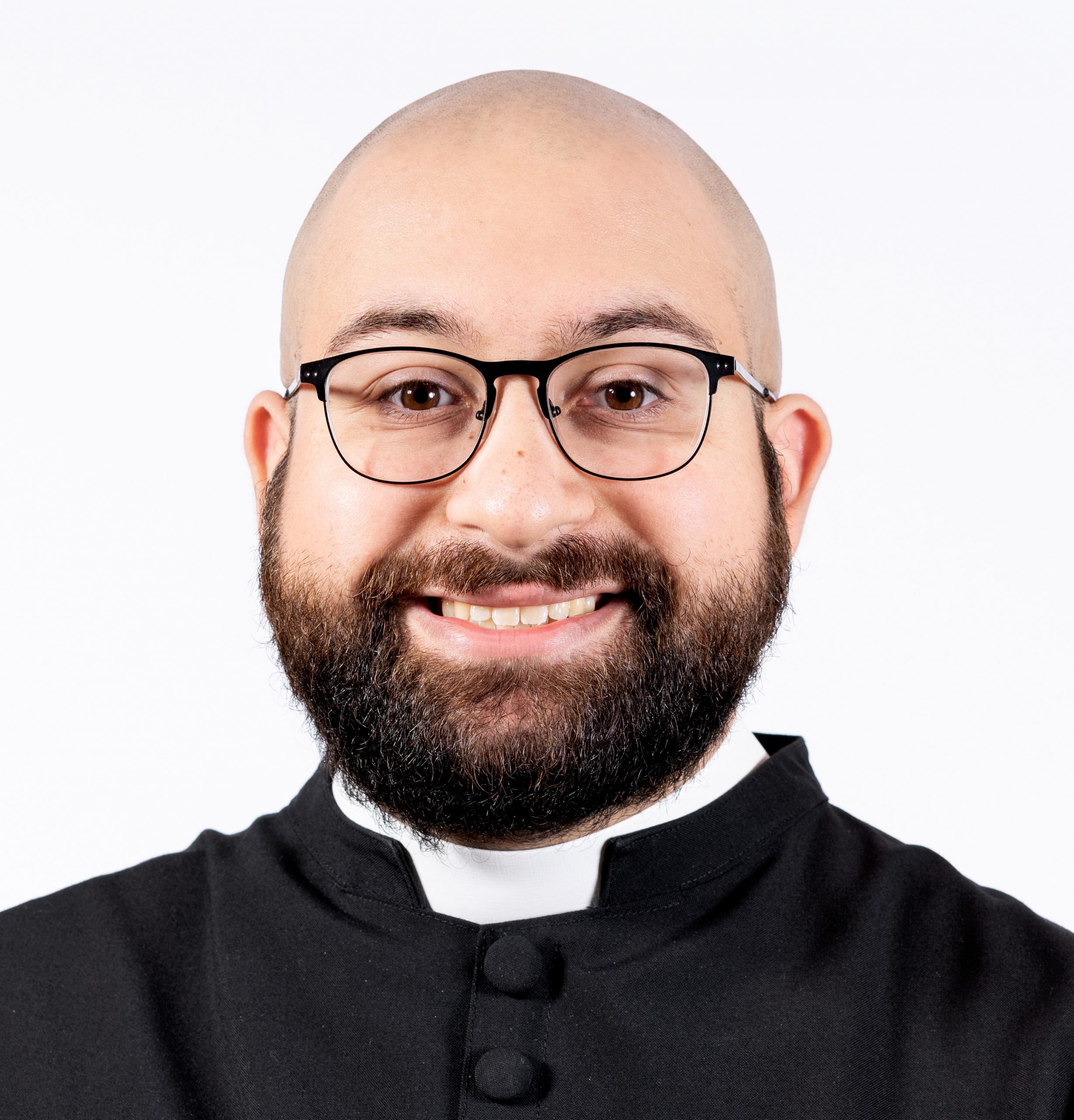 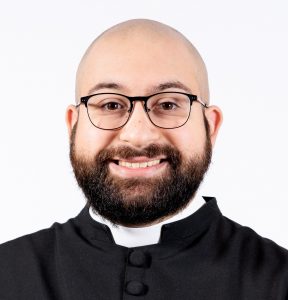 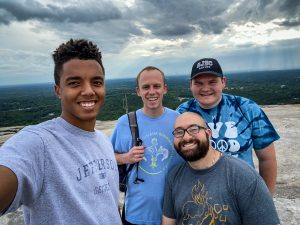 I was born in Brooklyn, New York and I grew up in a relatively large extended Italian Catholic family. I am the only child of my parents, and I am a cradle catholic. My family is entirely catholic and  I was baptized and made my first communion at St. Mary, Mother of Jesus parish in Brooklyn, NY and I lived in New York up until the age of ten. I moved to Georgia with my mother and I have lived in Lawrenceville and gone to St. Lawrence Parish ever since.

Two hobbies that I have are playing guitar and photography. I started playing guitar when I was around eight years old, and a love of music flourished from that moment onward. Photography became a hobby for me fairly recently. I have this as a form of creative expression and a form of work for my seminary as I have been active in the yearbook committee, documenting memories for my brother seminarians for years to come. I thoroughly enjoy both of these pastimes, and I hope to improve my skills in both of them, just for personal skill growth and enjoyment.

One of my favorite scriptures is the story of Jesus saving Peter from drowning when he walks out to him on the water.

“And in the fourth watch of the night, he came to them walking upon the sea. And they seeing him walk upon the sea, were troubled, saying: It is an apparition. And they cried out for fear. And immediately Jesus spoke to them, saying: Be of good heart: it is I, fear ye not. And Peter making answer, said: Lord, if it be thou, bid me come to thee upon the waters. And he said: Come. And Peter going down out of the boat, walked upon the water to come to Jesus. But seeing the wind strong, he was afraid: and when he began to sink, he cried out, saying: Lord, save me. And immediately Jesus stretching forth his hand took hold of him, and said to him: O thou of little faith, why didst thou doubt? And when they were come up into the boat, the wind ceased. And they that were in the boat came and adored him, saying: Indeed thou art the Son of God.”

This is my favorite pericope of scripture for two reasons. Firstly, because of how it is only when Peter loses focus on Christ that he begins to sink. I find that allegorical for how when we don’t look to Jesus amid the sufferings of life, we often lose our footing and start to sink into despair. When we focus on Christ in the dark and scary moments of our lives, there is peace, and we remain on firm foundations. Secondly, because of how quickly Jesus acts to save Peter. We don’t know how far away Peter is from Jesus. However, one can assume that they are pretty close together, if not face to face on the waters. When we lose our focus on Him, even if he’s right in front of us, we begin to sink. But, what does Jesus do? He acts quickly and saves Peter when he begins to lose his grip.

When I am going through challenging moments in my prayer life, I turn to this Gospel passage and ask the Lord to draw me up from the waters and enter into whatever suffering is currently happening. And he is always faithful.

It’s hard to pick just one! I have two saints who I would say are my favorites. St. Therese of Lisieux and St. Thomas Aquinas.

St. Therese of Lisieux, also known as “The Little Flower, or The Little Flower of Jesus,” is a modern spiritual giant and a great intercessor and friend. Around her feast day in my first year in seminary, I was drawn (by what I can only assume is her intercession in my life) to read her autobiography, and her profound yet straightforward spirituality touched me. She was a great friend to Priests and Seminarians in the missions in foreign countries and often wrote to them. Those priests and seminarians looked at her as a Spiritual Sister, and I do the same. She is a Doctor of the Church, and Pope St. Pius X called her “The greatest saint of modern times.” and Pope Pius XI, who had the privilege of canonizing her a Saint, said that she was the “Star of his pontificate.”

In my seminary formation, St. Thomas Aquinas has also become a favorite saint, not only because of his intellectual prowess but also because of many of the miraculous stories surrounding his life. His writings are astoundingly beautiful, and those same writings have allowed me to enter deeply into philosophy and the theological aspect of the church’s teaching. I encourage everyone to read his writings, preferably with the aid of some commentators, at some point. I also think of the incredible story of when, towards the end of his life, the Lord spoke to him from the crucifix in his study and said, “You have written well of me Thomas, what do you desire?” and St. Thomas said to the Lord “Non nisi te, Domine.” [Latin, Trans. Nothing, if not you oh Lord] St. Thomas was a man of deep prayer and great intellect. He is the epitome of Faith and Reason and is a great intercessor for study, which is needed in the seminary.

St. Therese of Lisieux, pray for us!

St. Thomas Aquinas, pray for us!

If I had to sum up my vocation story, I would say that I ran from the lord for a long time and didn’t know how to let him love me for who I am. After two compelling moments in my life, namely going to confession as a teenager after a very long time and feeling the Lord call me to surrender to his will for my life during a profound moment in a holy hour before the Blessed Sacrament, I decided that maybe God was calling me to be a priest in his church. I came face to face with the God who loves me, and I couldn’t feel anything else in my heart except to give myself over to him as, hopefully, one day by His grace, a priest modeled after his own heart.

Seminary, while academics can sometimes be demanding, has been quite a fantastic time for me. I have grown deeply in not only my interior/spiritual life, but I have come to be a better man during these years in seminary formation. I have found friends that I know I will keep for the rest of my life, and I am amazed every day by the love I receive from the Lord and how he upholds me in this life. If I had to explain seminary in a nutshell, it would be an environment soaked in God’s Grace and unique brotherhood amongst men called to live a sacrificial life for others.

The thing that I look forward to the most about priesthood is serving the people of God as a spiritual father in the celebration of the sacraments and in counseling them in whatever way I can as a priest of the church. One of the beautiful aspects of priesthood is the sacrifice entailed in the vocation and how the Lord fulfills His priests in their ministry. I have seen that desire well-up and grow stronger through my years in the seminary and I look forward to the day when I can function in persona christi [Latin trans. In the person of Christ] as the spiritual leader of a community. However, I want to do so humbly and minister by sharing the love of God to his people as a Priest.

For a young man thinking about the priesthood, I would say that he should be docile to what the Father offers and respond without fear. Very often, we can feel like St. Peter in our discernment and saying, “Depart from me, for I am a sinful man, O Lord” [Luke 5:8] and we run due to fear of our inadequacies. I know I’ve had those feelings in my own discernment. But, it’s important to remember the adage, “The Lord doesn’t call the qualified; he qualifies the called.” Also two quotes come to mind:

“Do not be afraid! Life with Christ is a wonderful adventure. He alone can give full meaning to life, he alone is the centre of history. Live by him! With Mary! With your Saints!” – St. John Paul II, Homily, Apostolic Journey to the Czech Republic, April 26th, 1997