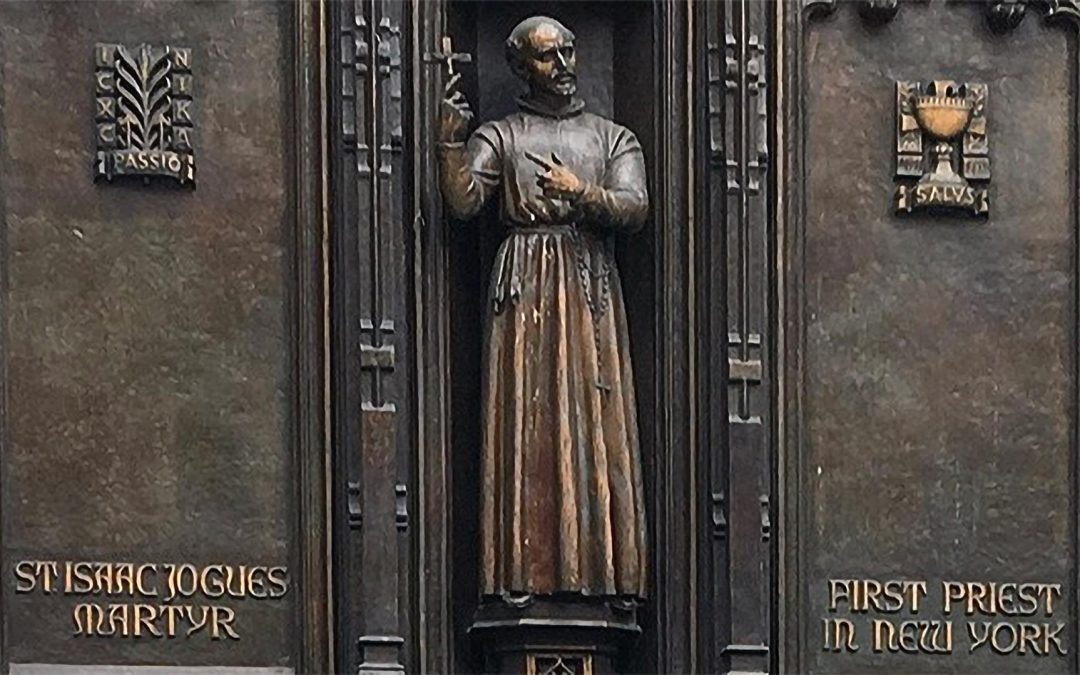 When people think of strength, of manliness, of courage, how likely is it that they think of the example of a saint? Holiness and virtue are frequently maligned by common opinion, but that certainly doesn’t mean that a saint is weak, or ignorant, or that he has turned to religion because he has failed to become successful in the world.

On the contrary, a man who lives his vocation well, who gives his life entirely to the service of God, is always going to be a man of greater strength, courage, and wisdom than a man who does not. He will be more of a man! A man who loves God strives to endure everything for the sake of that love.

As an incredible example of strength and courage, take St. Isaac Jogues, missionary and martyr of North America. Having joined the Society of Jesus at seventeen, he spent the next twelve years studying and teaching in France, during which time he was ordained a priest. While a novice, he had learned about a group of his Jesuit brothers who were travelling to New France to preach the Gospel to the natives, and he was drawn toward this mission. He received orders to sail to the New World when he was 29, after his Jesuit formation was complete, and he arrived in Quebec after a few months of travel.

Père Jogues worked among the Huron and Tobacco Indians for 5 years, learning their language and the work of a missionary. These years were mostly uneventful, though he encountered some hostility from the Tobacco Indians who blamed the “black-robes” for illness and disease. At the end of this time, after a quick scouting trip further inland, he was sent to resupply the Quebec mission.

On the second day of this journey, their party was attacked by the Iroquois, who killed and scattered most of the Huron who were accompanying the missionaries. They took the Christians (both French and Huron) prisoner, and throughout that night beat them and ripped out their fingernails. They were further humiliated by being stripped, exposed to the sight of the natives and to the elements. They were taken to an Iroquois village where the same abuses were repeated. The Iroquois cut off one of Père Jogues’ thumbs. At night their arms and legs were staked to the ground, and the children and adolescents threw hot coals on them and tore open their wounds. They were then left to the vermin for the rest of the night.

After three days of similar tortures, they were taken to two other villages, where the tortures continued. Though the Iroquois relented in the direct abuse, Père Jogues was to remain a slave of the tribe for two years. He was rescued by the Dutch, who lived in the nearby settlement of Fort Orange, and eventually returned to France, where he was greeted with surprise. Rumor had it that he had died!

He remained in France for only a short while. Though he was canonically unable to offer the Holy Sacrifice of the Mass because of his mutilated hands, he was given a dispensation by the Holy Father. As soon as the spring came, Père Jogues sailed once again to the missions in New France – his heart was still with the people who did not know Christ!

After two years in Montreal, Père Jogues was given orders to act as ambassador to the Mohawks, with which the French Canadians had an uneasy peace. Though he naturally feared the tortures that might await him, he embraced the mission and went with hopes to secure peace. But it was not to be so – a dominant Mohawk clan, the Bear clan, only wanted war. When they encountered the French ambassador, they took him captive. He was killed shortly after when one of the Mohawk hit him in the head with a hatchet. His head was cut off and mounted on the palisade of the village.

While some may not understand the reasons for what he did, it is doubtful that many would disagree that St. Isaac Jogues was a man of great strength and courage. He is, along with many saintly men and women, an example of living courageously in the service of God. Their lives of strength can be great inspiration for our own. Let’s not forget to study their lives and pray for their intercession as we struggle to live faithfully the lives to which God calls us for the sake of His Kingdom!

Read more about the life of St. Isaac Jogues.