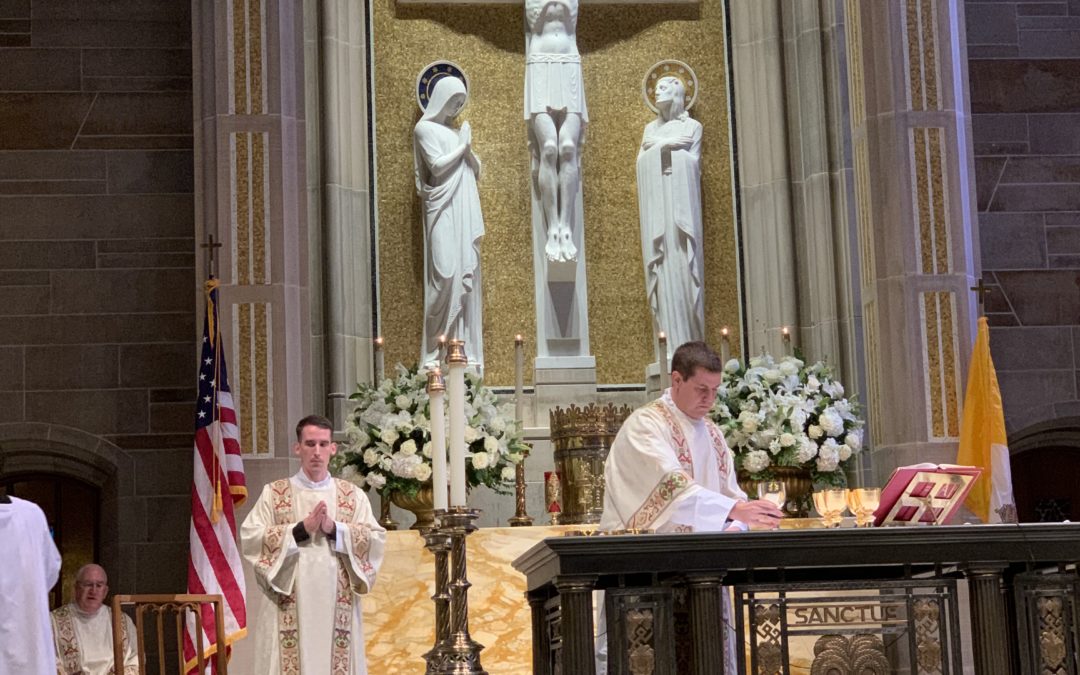 How will diaconate ordination be different this year due to the virus?

Robbie Cotta: Unfortunately it’s gonna be a small crowd at ordination. Only a handful of family members, friends, priests, deacons and seminarians will be able to attend the ordination. It’s a bummer, but I’m personally trying to keep everything in perspective, recognizing that there are folks who are suffering much worse things than having a small crowd at their ordination. If anything, it’s a small act of solidarity with the millions of folks who have gotten sick, lost loved ones, lost jobs and had major life events completely ruined by the pandemic. All things considered, we have a lot to be thankful for.

What do you think and pray about as you approach ordination to the diaconate?

Paul Nacey: The opening prayer in the Mass for the ordination of deacons says something to the effect that those being ordained have been taught the ministry they will now practice as deacons. So, I looked back at my journals, going back all the way to college and I reflected on all those encounters with others that really taught me and prepared me for this ministry of service to the deaconate. This reflection was so good as it helped me look at those blessings and challenges with new eyes. So, while I may be approaching the Saturday of my ordination with this idea of being unworthy of such a great gift and huge responsibility, the Lord in so many ways has already showed me that in small ways, He has already taught me many lessons and prepared me for this ministry.

Robbie Cotta: It’s actually been kind of hard to focus. I’ve already begun my summer assignment down at the San Felipe de Jesus Mission, so there’s been a lot of change and new things to adjust to in my life leading up to ordination day. It’s been really hectic trying to plan everything for ordination while also starting out at a new place (in another language that I’m not even close to being fluent in) while everything is in constant flux due to the virus.

With that being said, I find myself getting really excited in these final few days of preparation. I’ve been discerning a call to the priesthood since I was a little kid, so to finally be on the verge of ordination is surreal. It’s hard to believe that I’m actually about to be ordained… IT’S LIT!!!!!

What is something you’re excited about with being a transitional deacon?

Paul Nacey: I go back and forth on this answer when people ask me this question so I am going to name two things. One thing I am excited about doing is proclaiming the Gospel and preaching. The other thing I am excited about doing is celebrating baptisms. To be given that ability by the Lord, through baptism, to wipe away original sin, bring men and women into the Church, and make them adopted sons and daughters of our God leaves me without words in how to express how amazing those moments will be.

Robbie Cotta: I really don’t know what to expect, but I’m definitely getting pretty amped to start preaching. Seminary is tough, and it’s a lot of time in class and doing all kinds of other stuff, but we’re immersed pretty deeply into the Christian life. The intellectual formation combined with the experiences I’ve already had in ministry as a seminarian have me so excited to start preaching.

I’m scheduled to officiate at a few weddings of some long-time friends, so that should be really cool as well, and I can’t even imagine how awesome baptisms are gonna be!

Robbie Cotta will finish his last year of seminary at Mundelein Seminary (IL) where he has studied Pre-Theology and Theology for the past 7 years. He is known for “hunting for war hogs” (fishing), making fart noises, and being talented at guitar and singing. He loves the Falcons, Braves, and Georgia Southern. Read more about Robbie Cotta.

Paul Nacey will finish his last year of seminary at Notre Dame Seminary in New Orleans where he has studied Pre-Theology and Theology for the past 7 years. Read more about Paul Nacey.